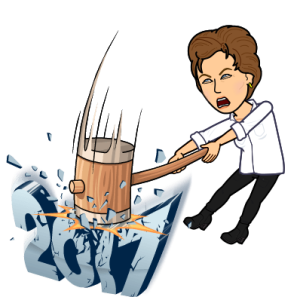 It started off well enough … mini-vay-kay in January at Reed Ranch with all the family; I so enjoyed that. Met a very nice, very fun but rather self-absorbed man who I pretty much knew immediately wasn’t going to be forever, but what a sweet-talker – and he loved to dance! Made for a very fun birthday. Hibernian party in Michigan in March. Not a bad spring. Work was going okay; I got a new boss that I rarely saw, and I got a raise.

Then … karma? Bad ju-ju? I don’t really know. June came, and everything fell apart. The man thing fizzled as fast as I could say the “M” word in response to a question that had absolutely nothing to do with him. Heart-hurt and confused, I tried looking forward but with too much hope and too little confidence. Ann, my cohort, left Kindred, work became more stressful. Met a few nice guys but no spark anywhere. I did buy my own condo, and I got to see my kids in August.  And then hurricanes, condo repairs, floor floods, identity theft, unexpected slights by former friends, an overly-stress-filled job, my Anita moving away; meets and break-ups faster than a speeding Bonanza causing me to again question myself, my appeal, my worth.

I just want it over. I know there’s no guarantee that 2018 will be any better than ’17. I realize that. I understand it’s what we make it and even more what’s in my head. I know all that intellectually. I do.

But 2018 holds at least some promise:  A new floor!  Ireland in March!  A healthier, more active me. And Meg is closer, though only through February.

I actually have no idea why I think 2018 will be better. It certainly starts off with a bang, at least through March, but then … but then?

It’s funny (not?), but part of me so wants a relationship with someone who will love me for me and want to share in my life. Another part of me wants my independence, my quiet, my space. Where is the balance? What is it? People do it all the time, but can I? I used to see myself either in a long-term relationship or even married again; I thought that’s what I wanted. But that was in the long run. When does the long run begin? I was presented with the possibility just recently in a ‘too-good-to-be-true’ scenario. I was offered the world and more, but I’d have to leave mine. Part of me wanted to pick up and go. Just go. But another part of me…the deep-down part of me said, ‘Wait a minute.’  While it all sounded good in theory, I just didn’t know about giving up everything I’d worked so hard for these past years.