We had lots to look forward to this Thanksgiving of 2012. Andrew and his family were meeting the Meads at DisneyWorld for the whole week. They’d picked the Wednesday before Thanksgiving to rent a car, load up the kids, and head over here for the afternoon — no easy feat! They showed up right around noon, and it was so nice to see them all! I thought perhaps little Evie wouldn’t want anything to do with this Gramma she never sees, but I had no worries. She came out of her car seat right into my arms and wasn’t a bit shy! Such a cuddle bum! Oh, my goodness, is she ever sweet. Dez had to lured, though, and since they’d both been awakened from a nice nap, I expected the worst and was pleasantly surprised by how quickly he came around. I’m SO grateful to Skype! After hugs all around, we got them all inside and fed them lunch, then headed to the beach to fly a kite!

It was windy, and not especially warm, so we didn’t spend too much time there, maybe an hour. Evie sat on the beach 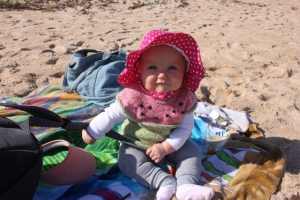 towel looking darling while the boys set the kite flying in the wind. Surprisingly Dez was only mildly interested. The ocean and the sand had his full attention. He was amazed that his little feet left footprints in the sand, and then those huge waves would come up and wash them away!

He was in my happy arms most of the time since there was no way he was going to let the water touch him. It was getting close to high tide and the waves were quite big; nothing I’d want to swim in. We ran in and out of the water with him safely above the waves, then we’d walk along the beach and find ‘treasures’ of shells. But the wind was just too much for Evie, so we eventually made our way back to the car and drove to a little playground to wear Dez out a bit more.

Back at the house I had a pot roast dinner waiting. Drew got to watch his little brother in his movie, then it was back into the car for their  stop-and-go drive back to Orlando.

Thanksgiving Day found Thom and I headed to the Animal Kingdom Lodge for a turkey dinner with the entire family where I was able to hold Evie while everyone else ate in relative peace. Afterward, we went to Disney’s Hollywood Studios for the Osborne Family Lights on the Streets of America. I cannot explain it here, and even the photos can’t do it justice. Thom did put together a little video. But how to explain how I felt standing there with the Christmas music coming from all sides, the Christmas lights waving and blinking to the beat, and then — the snow! Yes, it snowed! To say I was overwhelmed would be putting it mildly. What an amazing experience, and my many thanks to Drew for this wonderful gift of Christmas!